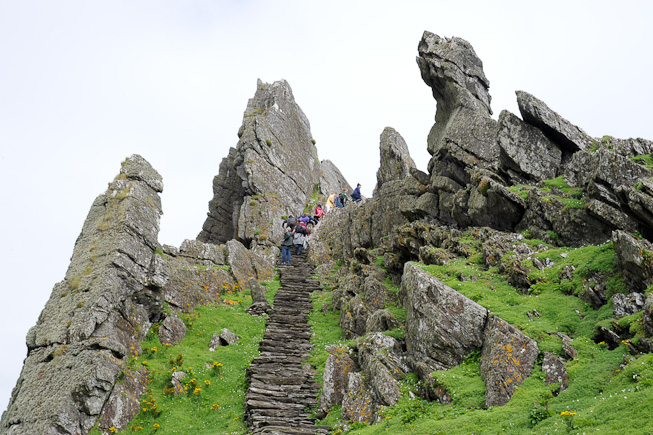 Our second week of session three started of with a great weaving demo from Julie, and a few people even met her challenge managing to top Frank’s best efforts. We continued with our photography and painting assignments where it was evident by critique on Tuesday that everyone put in a huge effort.

On Wednesday we headed for the Dingle Peninsula where we visited Gallarus Oratory, a 1200 year old stone church built entirely from stone. Resembling an upturned boat this elegant structure has remained bone dry despite its lack of mortar. Paul, Janet and Jenny even managed to earn trips to heaven by squeezing through the buildings tiny window. Along the way we enjoyed some fantastic ice cream from Murphy’s. And a short visit to a hidden beach at the end of the peninsula with a great view of Dead Man’s Island.

Our second day out west was spent in and around Killarney where we visited its spectacularly restored Ross Castle, a beautifully dilapidated Muckross Abbey and had a fun night listening to some traditional Irish music and trying out some of the rides at the Puck Fair in Killorgan.

On our last day we visited the island of Skellig Michael, a Unesco World Heritage site off the coast of the Iveragh Peninsula. On the choppy boat ride out we had a close look at the gannet population and seals on Skellig Bheag. Once there, it was a steep climb of over 600 steps to the beautiful monastic settlement. Please have a look at the new photos on the website