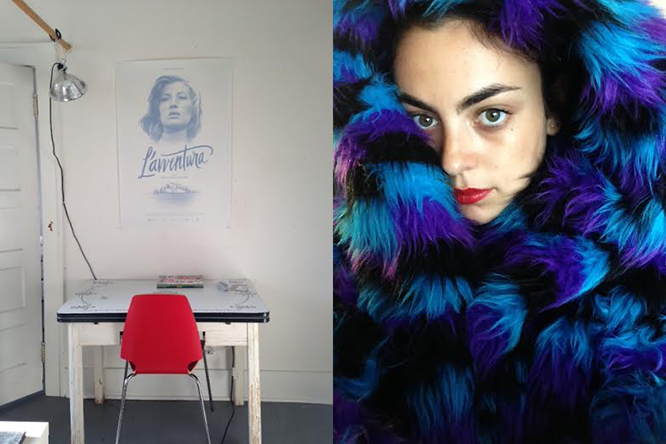 Sophie was one of our first students for Summer Arts Program Art on the Farm during the summer of 2008. She was the youngest of the group, and will be graduating from college this year so it’s a sort of milestone for us. Even at that early stage Sophie was incorporating text into her art so it seems fitting that she has turned to writing in her studies at Bard College. Sophie has graciously taken time out of her busy senior year to answer a few of our questions.

CHS: What is your most vivid memory from your summer here in Ireland? How did your time at Cow House inform you as an individual?

SB: All of my memories from Cow House are extremely vivid. I remember being the youngest person in the group; it was the summer before beginning my freshman year of high school so I was very anxious. I think being pulled out of a familiar environment and plopped down in a completely foreign place led to a real period of artistic and emotional awakening for me. I remember standing on the edge of this dock when we visited the Aran Islands and just spontaneously plunging into the freezing water with all of my clothes on. It was such a joyous moment. Another fond memory were those wonderful night photography excursions that we went on–tramping through reeds and grass with the only light of the moon and a few flashlights. It was so mystical and freeing (and I know that I’m not being overly nostalgic here because I still have my journal that from that time and the entries all express a similar wide-eyed realization that what I was experiencing was something truly special).

CHS: You will be graduating from Bard this coming spring. What have you been up to recently? What are your ambitions for the coming year?

SB: My major at Bard is creative writing. This final year is the most important because I am spending it working on my senior project. I’m currently working on a collection of essays–they’re all hybrids between criticism and the personal, so I’ll be writing analytically about art, film, literature, and culture, but in a much less formal way than I’ve been trained to do. It’s a lot of pressure but I’m really looking forward to it. And after graduation…who knows?! I’m hoping to do a lot of traveling and eventually settle down in a European city. My dream job would be to open my own “shopping mall” for artists–a place where you could see a film, go to an exhibit, have a cappuccino, and browse a library, all under one roof. Does that sound crazy? I just want to surround myself with interesting people and things. Hopefully the details will sort themselves out as I learn and grow.

CHS: You are no longer studying or making visual art. Have you found other avenues for personal expression?

SB: The great thing about being at a small liberal arts school is that it allows you to explore all of your interests before committing. I can’t tell you how many majors I went through before deciding on creative writing (which, by the way, is officially referred to at Bard as ‘Written Arts’ but for some reason I can never bring myself to use that term–it just sounds so pretentious outside of an academic context). I eventually decided on writing because it allowed me to combine all of my interests. It’s really about figuring out what works best for you. I would never be where I am today if I hadn’t taken that Cultural Anthropology course or that Intro to Video workshop. At the moment I’m focusing all of my creative energy on writing nonfiction–ever since I started reading Art Forum in high school, I’ve always really been turned on to reading criticism and get almost as much pleasure reading a great essay on a work of art as I do viewing the art itself. For some reason, there was always this taboo surrounding criticism–it’s stale, derivative, trite, etc. I felt embarrassed that I was more drawn to reflecting about other people’s art than I was to generating my own. Honestly, there are so many writers out there who are doing really interesting, nonconventional things with criticism–I’m thinking of people like Chris Kraus and Dave Hickey. I’d like to think that as long as there is art, there will be people out there getting paid to write about it.

CHS: was there a single class or professor at Bard that had a lasting impact on you? In what way?

SB: The class that stands out most in my mind as directly influencing the work I am doing today was this year-long film studies course which was a massive survey of the history of cinema, from the silent era all the way through the 1980s. I’ve always been a huge film lover but this course taught me how to articulate my feelings about film in a substantive, theoretical manner. Not to mention that the class introduced me to all of my favorite films: Meshes of the Afternoon by Maya Deren, L’Avventura by Antonioni, Rules of the Game by Jean Renoir. Being able to see all of these incredible films on the big screen and then led through really rousing discussions of them was an invaluable experience.

SB: I do still rap! It’s kind of a hidden talent though–now I usually only reveal my skills if I’ve had a couple of drinks. I think being able to recite Juicy from memory is kind of like riding a bike: once you learn it, it can never be undone.