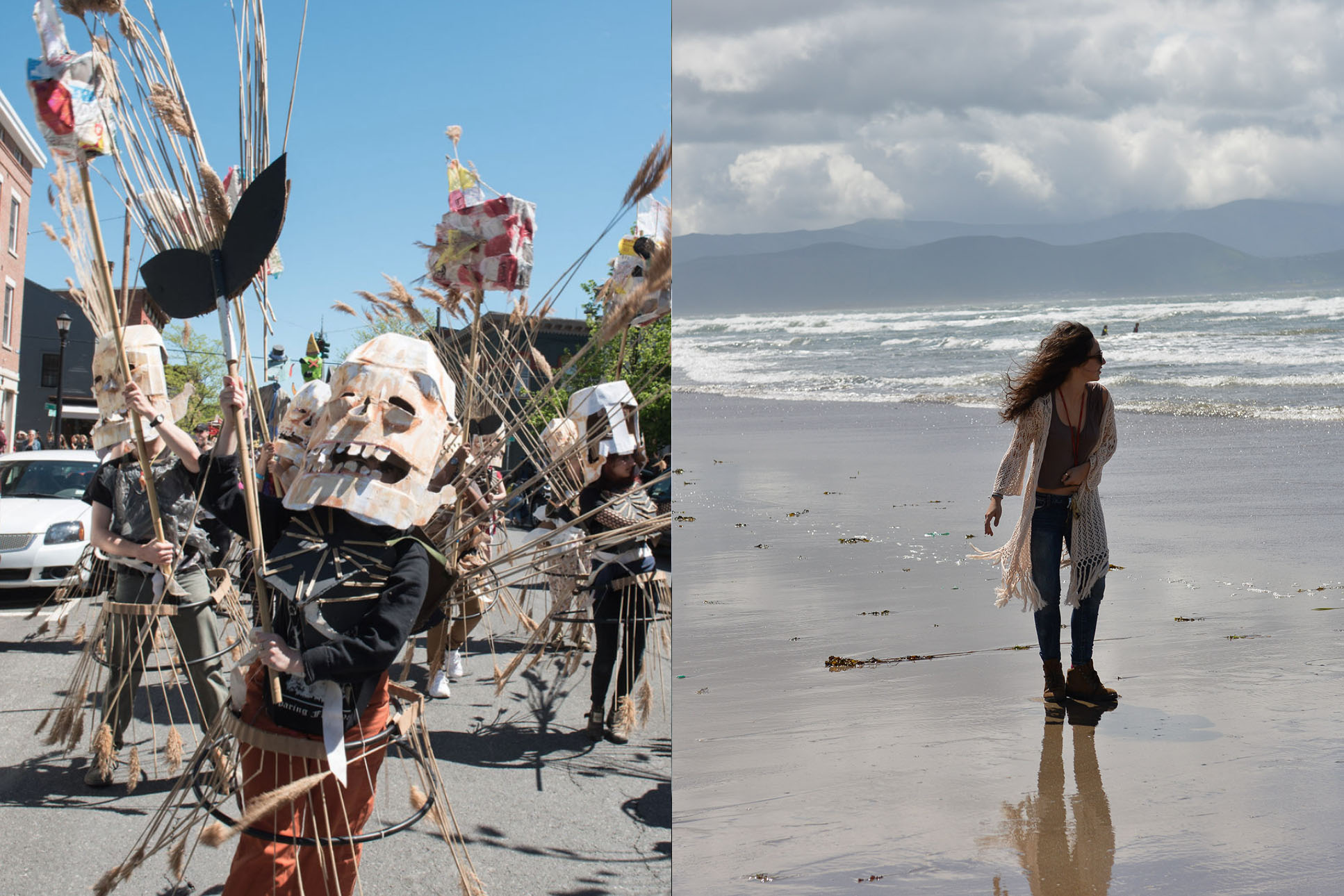 Sarah Bastacky was a student during our summer program back in 2014. She graduated this spring from Bard College with a BA in Studio Arts and is currently based in New York’s Hudson Valley. Sarah’s projects and performances invite puppets, paintings, and whatever else necessary into the process of building a story and a world, most usually a fractured and trampled sliver of American landscape and mythology.

Her most recent work uses puppet performance to tell stories using life-sized puppets and crankies, an early puppeteering technology of scrolling panoramas. In collaboration with other performers and musicians, she drags the linear model of a story into a state of decomposition and rebirth. We are grateful that Sarah has taken the time to provide some wonderful answers to our questions. Reading them has brought back some great memories.

CHS: You have been exploring puppetry in your most recent work. What led you to work in this particular art form? Can you describe a bit about your process and the themes you’ve been exploring?

SB: Whenever people ask me “why puppets?” I can’t even remember exactly why or when it started happening. I started using puppets during a time when I had been working with sculpture, painting and video separately. In a way it was a practical decision, to condense things. At the time I was drawn to its campy appeal, and somehow avoided historic examples for a while. One of my first strange encounters was with this decrepit 1980s Little Red Riding Hood puppet show. I was taking a 16mm film class and ordered the print of that puppet show on eBay. It was really busted and everything tinged red, hand puppets floating in a wooden stage. It was one of the only prints I had handled that had sound, a sweet old lady narrating this very obtrusive and crude dialogue. For some reason, this may have been what hooked me, this multimedia puppet show with flaws and cliches and homespun grit–a true tour de force. Eventually, I started researching puppetry in earnest, which is when it was able to find its place in my practice. The more I investigated, the more I saw puppetry gracefully tackling contradictions that I had been interested in–the comic and gravely serious, the still and the moving, naive and sophisticated.

At Bard, we do a year-long thesis project, and I ended up making a giant crankie (scrolling panorama), an early form of puppetry usually involving shadow puppets. I did a puppet show in front of it, kind of the reverse of how crankies usually work with all of the mechanics disguised behind a screen, in shadow. The puppets I made were all on wheel and axle, pushed by performers. It was all very painstakingly analogue, and I made an effort to expose a lot of the building process in the work, but it was tempered, too, by some good old fashioned stage magic. The whole thing was a story about a woman who is haunted by swans and wants to have a child. She finds a swan’s egg in a nest outside of her house and seeks a shaman to help her hatch it, but when it does hatch a giant inflatable swan emerges, dwarfing her and even the shaman as the omnipresent swans finally come into power. In the end, the plot didn’t come through that clearly, and it was more of an atmospheric piece like a carnival or an opera. A friend of mine played the electric organ for the score, from these old songbooks, and the music was very haunting and cheesy, like the funeral dirge version of “Oh Susannah”. I was working with another puppeteer, as well, and that collaboration became very important to me. Right now I want to be collaborating with other artists from the very beginning of the process. I’ve been doing some community workshops with a nearby parade nonprofit, Processional Arts Workshop, which has been so creatively game-changing.

CHS: In addition to offering exceptional majors in visual art, Bard is a liberal arts college. How do you think this affected your education as opposed to the more specialised approach offered in art school?

SB: In art classes at Bard, there is the feeling that we’re always working in the context of the things we think about academically. No matter what department you’re in, there is a lot of reading and writing. That has enabled me to think about approaching my work through the lens of different kinds of investigating–approaching a sculpture as a historian, approaching an essay as a painter. There is real magic in some of that interdisciplinary approach. Also, a lot of my friends and peers weren’t studying art, so we were able to offer many perspectives in and outside of the classroom. A lot of Bard students are involved with local communities outside of the college based on their interests, so in that way, it felt like there was an element of applying our education to things important to us (like activism, field research, ESL tutoring, farming) in real time while we were still students. It is a very special place. A lot of unexpected connections and epiphanies happen there that I’m not sure I would have experienced at art school. One thing is that the technical training in the studio arts department is a little negligible, so you have to teach yourself certain things. I was terrified of the woodshop until I had to use it for my senior project!

CHS: Thorough your undergraduate study have there been any particularly impactful moments, classes or professors that have had a profound impact on you as an artist or individual?

SB: So many! One that stands out is a film class I took in the autumn of 2016 called Framing the Election. We watched films that were made during other elections like Haskell Wexler’s Medium Cool and TVTV’s Four More Years. We spent the semester collecting different types of information about the election–mostly voters’ opinions from interviews, internet trails, polls–and made some work trying to make sense of the whole thing. The day before the election we staged a performance in the student centre, an assembly line in which people would “vote” for a candidate, and in turn the vote would be “processed” by our class: the ballot was photographed, marked with many strange stamps, soaked in water, ripped in half, folded into origami. After the election the mood drastically changed; we all had to make final projects, and they were imaginably dark. That class was the first time I really understood how artists meditate on and work through things much larger than themselves.

CHS: What is most memorable for you from your summer here in Ireland? How did your time at Cow House inform you as an artist?

SB: Cow House changed my life! I loved being in the barn when everyone was working (or not working) after the day ended. There was always such cosy energy and camaraderie. I have to say, one of the most memorable things was the song, “SheetRock” (by TimeSheet). You and Peter unearthed a song on your computer that you had made on Garage Band, and it was this bizarre piece of electronic music with a crazy drop in the middle. And somehow it was so good!! I remember we would listen to that song on repeat in the barn and beg to have you play it again when one of us was in the mood. And it was only on your computer because you made it on Garage Band, so only you and Peter had the power to play it.

Being there was the first time I realized it was possible to be an artist. I had always been told that art wasn’t a profession. It was so inspiring to see that you and Rosie had made such a beautiful life of making, sharing and teaching art. Ever since then, I have thought of art-making as a very communal experience, much more than just sitting down in the studio and making something.

CHS: You have just finished your last semester at Bard. Congratulations! What are some aspirations you have for the coming year?

SB: Oh no, the dreaded question…No, I’m actually looking forward to moving
on. I am moving to New Orleans. Right now I’m looking for work there building things for parades or theatre. I’m kind of addicted to parades at the moment. I am excited to see how my own work evolves on a smaller scale outside of school. I also want to make a friend who is 50 years older than me, make an adaptation of the movie Holes with an all non-boy cast, and go to Indonesia. Just a few aspirations.