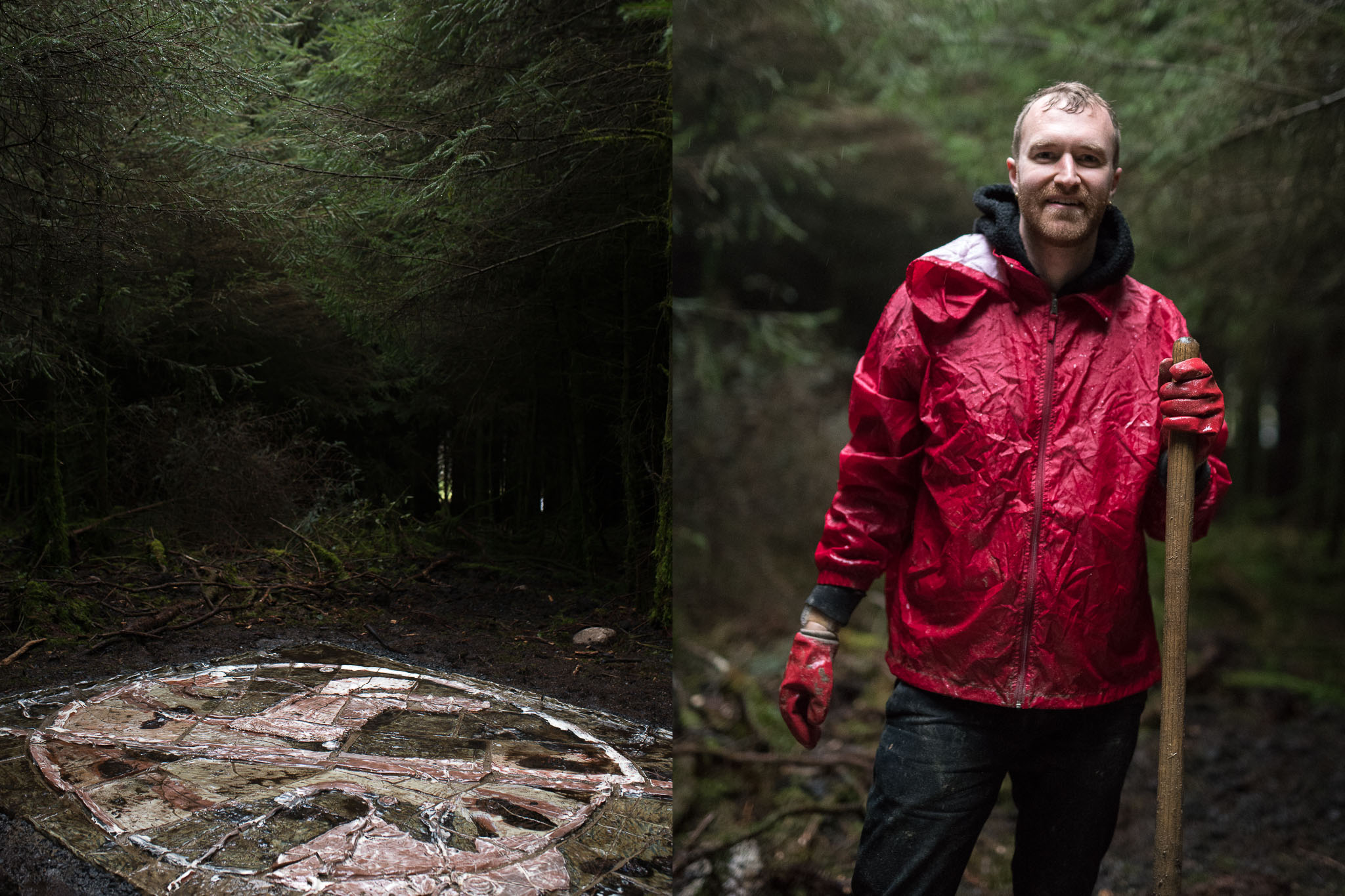 During the week beginning March 17th, 2018, during our Open Residency programme, artist Richard John Jones installed his work Public Sculpture, a figure without a body. We hope for this to be the first of many public sculptures in the woods adjacent to the Cow House. This installation found its beginnings as a work included in the exhibition The Plough And Other Stars curated by Kate Strain in 2016 at the Irish Museum of Modern Art. This exhibition was associated with our own 2016 residency The Centre For Dying On Stage #3 also curated by our then curator in residence, Kate Strain. We were thrilled when shortly after the exhibition we were contacted by both Richard and Kate who proposed the farm as a permanent home for the work. After much coordination, it was wonderful to see the successful installation despite some fairly horrific weather. Special thanks to artist Deirdre Buggy who took time out of her busy schedule to help Richard with the installation. We look forward to sharing this special addition to the farm with our future visitors.

Richard writes of his own work, “Public Sculpture, a figure without a body (2018) is inspired by the ceramic wall murals that were often incorporated into the progressive public architecture of the 1970s and is particularly influenced by the work of Danish artist Asger Jorn. As the title suggests, the piece is somewhat self-consciously public and maybe expresses itself as an anachronism. Taking reference from wall murals this piece has only ever been exhibited on the floor and is almost grave-like. The design has a discarded pair of t-shirt and trousers as a central motif, standing in for the absence of a body, and is embellished with various gestural marks and flourishes that are part of a painterly visual language that spans all of my work. The work also features the constellation of the plough which is a direct reference to the exhibition for which it was originally produced The Plough And Other Stars curated by Kate Strain in 2016, itself a reference to the play by Seán O’Casey. The constellation is there to make a connection between the earth and the sky which will be visible when one lays on the piece looking up through the clearing in the forest canopy. Originally shown unfired, it used to be titled Public Sculpture, I dissolve in your perennial tears but has since made the transition to permanence through the firing process. Although now installed for the long-haul, it still exhibits the cracks and fractures that it picked up through being shown at its most crucially fragile moment.”

Richard John Jones’ work is concerned with the interaction between visual forms of representation/abstraction and political forms of recognition and marginalisation. His work often addresses absence, erasure and silence or acts of silencing. Performances and a critical approach to their documentation are central to his work and inform his use of fabric, print, domestic craft techniques, video and installation.

Jones is a graduate of Central Saint Martins, London and the Sandberg Instituut, Amsterdam and until 2012 was a Co-Director of Auto Italia South East, London. His work has been shown at the Irish Museum of Modern Art (IMMA), Dublin, Museum of Modern Art, Medellin (MAMM), EYE Film Museum, Amsterdam; Rond Point Projects Room, Marseille, SPACE, London and the Gwangju Biennial in collaboration with AA Bronson. He has recently published his first book entitled Paraperformance with Immixtion Press and Kunsthal Aarhus. He is currently a recipient of the IMMA Freud Project Residency, Dublin.