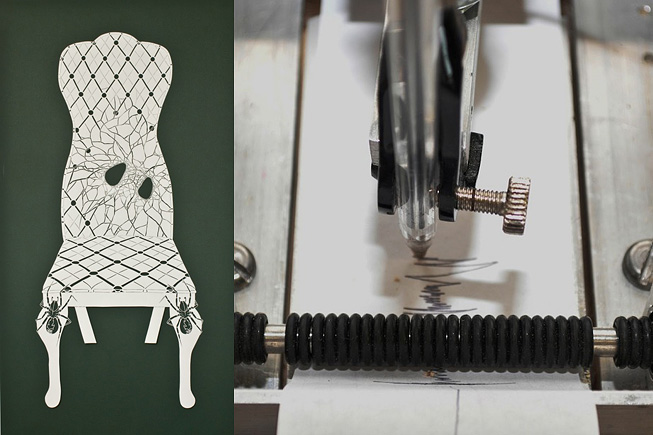 Wexford Arts Centre, in collaboration with Cow House Studios will host a two-person exhibition of recent work by 2010 artists-in-residence, Matthew Denniss and Gail Cunningham. In developing their work at Cow House Studios, Denniss and Cunningham examine the various aspects in which energy resides. With Cunningham’s work, her highly controlled, precision-cut paper images reveal a hidden energy of powerful proportions, conveying an anxiety as spiders crawl and scramble frantically from deep within the confines of the domestic ritual. Denniss, on the other hand, is more concerned with the physical elements of energy and his association with the primitive means of harbouring and utilising it. In doing so, he is attempting to explore and reveal the true motives and philosophies of the original inventors, responsible for such machines like the phonautograph and the wind turbine.

Matthew Denniss graduated from Goldsmiths College, London with a BA in Fine Art in 2006. Denniss was Artist in Residence at Manchester Metropolitan University in 2009, and has exhibited in Newcastle, Glasgow, London, Norway and the Czech Republic. He currently lives and works in Manchester.