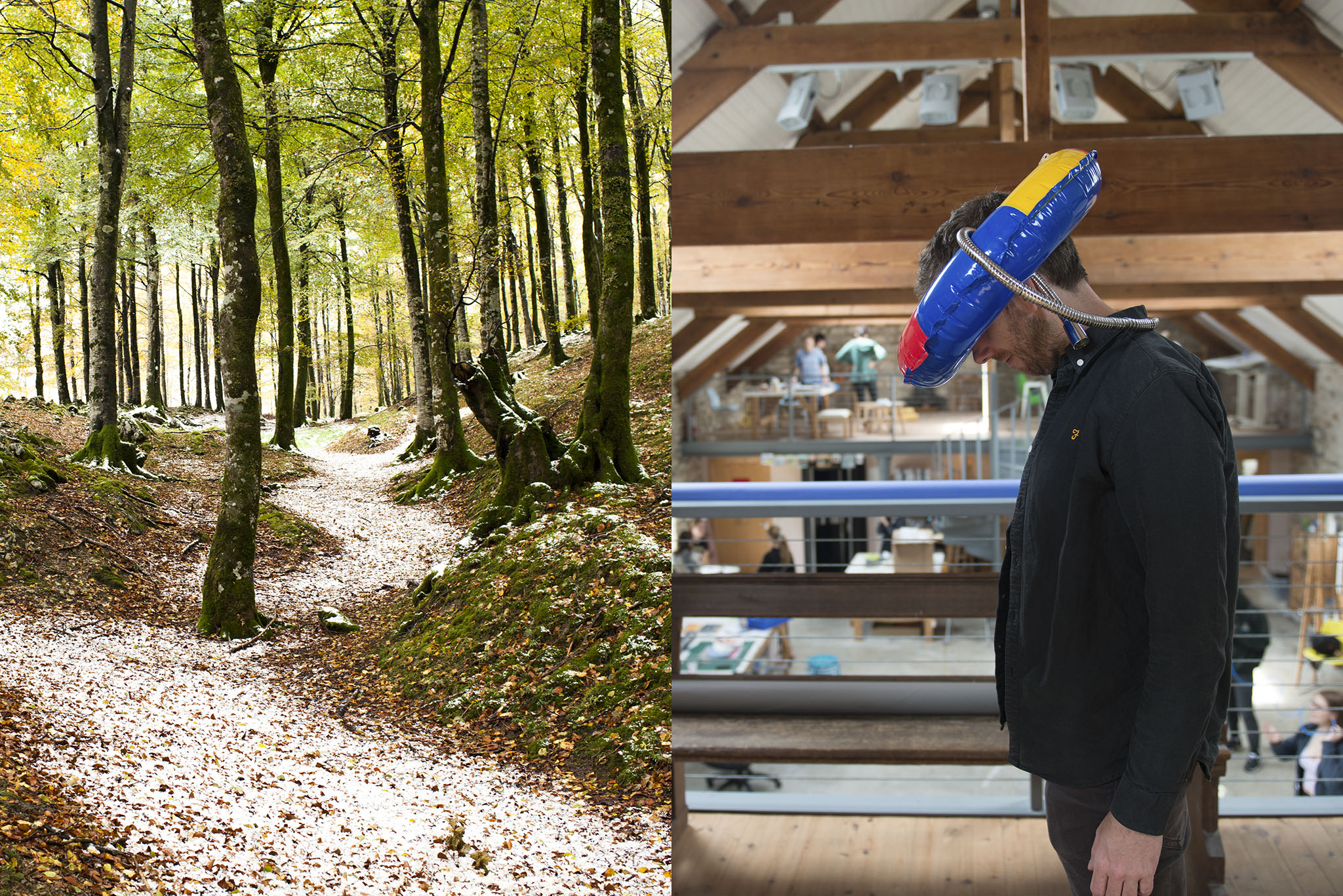 Paul Gaffney is one of four associate artists at Cow House Studios and participated in his first residency with us back in 2014. As an associate artist, Paul is a regular visitor to the farm and teaches during our summer art program Art on the Farm. For the past number of years, he has been investigating different ways of experiencing and representing landscape. His research is focused on developing a meditative approach to landscape photography and explores how the act of image making can enable and disrupt a sense of connection with one’s surroundings.

Paul was recently selected for the Arts Council’s ‘Next Generation Bursary Award’ 2016-17. His books have been nominated for the Photobook Award at the International Photobook Festival Kassel (2013 & 2016), shortlisted for the European Publishers Award for Photography, and selected for several ‘Best Photobooks of The Year’ lists. Gaffney’s work has also been presented as solo exhibitions at the Centre national de l’audiovisuel (Luxembourg), Flowers Gallery (London), Gallery of Photography (Dublin), Belfast Exposed Gallery, Ffotogallery (Cardiff), Oliver Sears Gallery (Dublin) and in group shows and festivals in the US, UK, South Africa, Ireland, Italy, France and China. His images have been published internationally in print and online periodicals including American Suburb X, Harvard Design Review, Creative Review, The New Yorker, European Photography, DU Magazine, Katalog, PaperJam, Source, Photomonitor and Landscape Stories.

CHS: You came to photography later in your career. What compelled you to start making photographs and subsequently continue your education?

PG: My interest in photography began while I was travelling on my own for the first time in south-east Asia in my mid-twenties. I had a point and shoot film camera with me at the time and I was taking photos pretty much every day for a few months. I had a bag of films to develop when I arrived home, and I was intrigued by why some pictures, which I thought would work when making the image, actually fell flat when printed, whereas others were unexpected happy accidents.

It piqued my interest enough to buy an SLR a few months later and I started taking some darkroom classes at the Gallery of Photography in Dublin, which lead to a two-year part-time evening course in photography at Griffith College. I thoroughly enjoyed the experience and threw myself into the projects, one of which was about my grandfather’s house and his possessions. He had recently had a stroke and we knew he would never return home. I decided to spend some time at his house, which was next door to where I had grown up, to see if I could somehow say something about him by photographing the things he held dear.

We had an exhibition at the end of the year and I was nervous about how it might be perceived by my family who hadn’t seen the pictures up to this point. What interested me most in their response was that everyone projected their own stories onto these images, even people who had never known my grandfather. It was a turning point for me. I realised that this was what I wanted to pursue… to make work which was meaningful to me, but which could somehow connect with others in a more universal way. My tutors convinced me to quit my day job in IT and move to Newport in Wales to study for a degree in documentary photography (I was 29 at the time).

CHS: During your residency at Cow House Studios in 2014, you were able to shoot a body of work that comprised the images in your book Stray. How did that experience build upon the themes and ideas explored in your previous book project We Make the Path by Walking? How do you believe it lead to your next project Perigee?

PG: We Make the Path by Walking was about the idea of long-distance walking as a form of meditation and immersion in nature. The images were made over the course of a year spent walking over 3500km around Spain, Portugal and the south of France. I sought to create a book and exhibition which would use a sequence a series of landscape images which could somehow convey the essence of the walk, and which would evoke the internal journey that happens in parallel with the external.

My MFA dissertation and subsequent PhD research reflected upon this process, and I became interested in finding a way of more easily tapping into the more intuitive way of working which would sometimes come about after I had been walking for several days or weeks in a row. I wanted to develop a way of working where the act of photographing wouldn’t disrupt that heightened sense of connection I could have with my surroundings.

I arrived at Cow House with a simple plan to experiment with exploring the landscape at night. I had noticed that walking in the dark gave me a very unusual sense of my surroundings as my visual sense was so reduced that the other senses became very heightened. One evening when coming off the mountain, I inadvertently got lost in the forest behind the Cow House, which lead me to make some images at very high ISO settings while trying to find my way out.

I became interested in how the camera could see more than I could, and when I began editing the images into the first book dummy, I found that the shaky, noisy and out of focus aesthetic, coupled with the loose, almost cinematic, narrative evoked the slow, tactile experience of cautiously navigating through such a disorientating environment. I decided to return to the forest every night in near total darkness, allowing myself to get lost and trusting in my instincts that I would find my way.

I moved to Luxembourg to start working on Perigee just a few weeks later, and many of the same preoccupations stayed with me, although it was a very different environment and required its own approach.

CHS: What are some of your strongest memories from your first residency at Cow House? How do you feel residencies, in general, have helped advance your practice?

PG: I had never taken part in a residency before arriving at Cow House and to be honest I wasn’t sure what to expect from the place or the experience. It was an eight-week residency and I was looking forward to being able to have the time and space to make work after barely having had a chance to shoot for the previous year due to my PhD research. It took about half of my time at the farm to figure out what I want to do and to slow down enough to be able to make work, and then at a certain point things started to happen very quickly (I’ve since noticed this pattern in pretty much every residency I’ve undertaken, regardless of the duration!)

I started by making some video experiments at night (which I’ve recently returned to), and then made a small photobook with my friend and photographer Diane Vincent, who was visiting for a few days. In the end, I made all the images from Stray and the first book dummy in the last two weeks of the residency, though I probably would not have been able to do so without first having had the time to potter, ponder and explore.

I’ve been on a few other residencies since then (my most recent project Perigee was made during a couple of residencies in Luxembourg) and I think they are a great opportunity to tune out the noise of daily life and concentrate on my practice, while also being a great place to meet other artists and share ideas. Cow House is a particularly good place to do this, and I was lucky to have some wonderful company while I was there, and I’m looking forward to returning for another short residency in the new year.

CHS: How did your experience this summer teaching during Art on the Farm Summer Art Program change your view of Cow House? What was most satisfying about your experience teaching? Is there a favourite moment that stands out in your memory?

PG: Cow House has started to feel like a home from home over the past few years, so I was delighted to have been offered the chance to spend more time teaching there. When you are on the farm as a resident, it feels like such a quiet and peaceful place that it can be hard to imagine sharing the space with 20 students on a 24/7 basis, which was quite a change from the residency experience and a bit of a challenge at times.

It was incredible to see so much great work being made under the one roof in so little time and it was particularly rewarding to see the students’ hard work come together in the last day or so before the critiques, and to see many of them make work to a standard they hadn’t thought possible beforehand.

One of my favourite moments was when I noticed a student on his own in the studio on the final night, quietly looking back over his work just before packing it away. It was obvious that he was really proud of what he had managed to achieve in just a few weeks, and I too felt proud for having played a small part in his experience.

PG: Earlier this year I began working on a new project in West Cork. After having travelled so much over the last few years I intend to make work there slowly and over a longer period of time, in order to take the time to know the place, while continuing to develop my research.

I’ve recently received funding from the Arts Council to further develop the project, and I’ve started to experiment with combining photography and video with new technologies to create immersive experiences of nature. 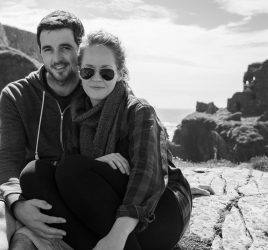 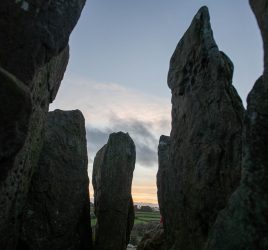 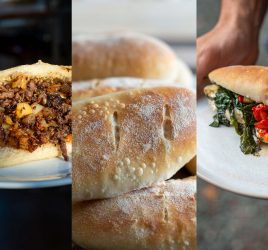