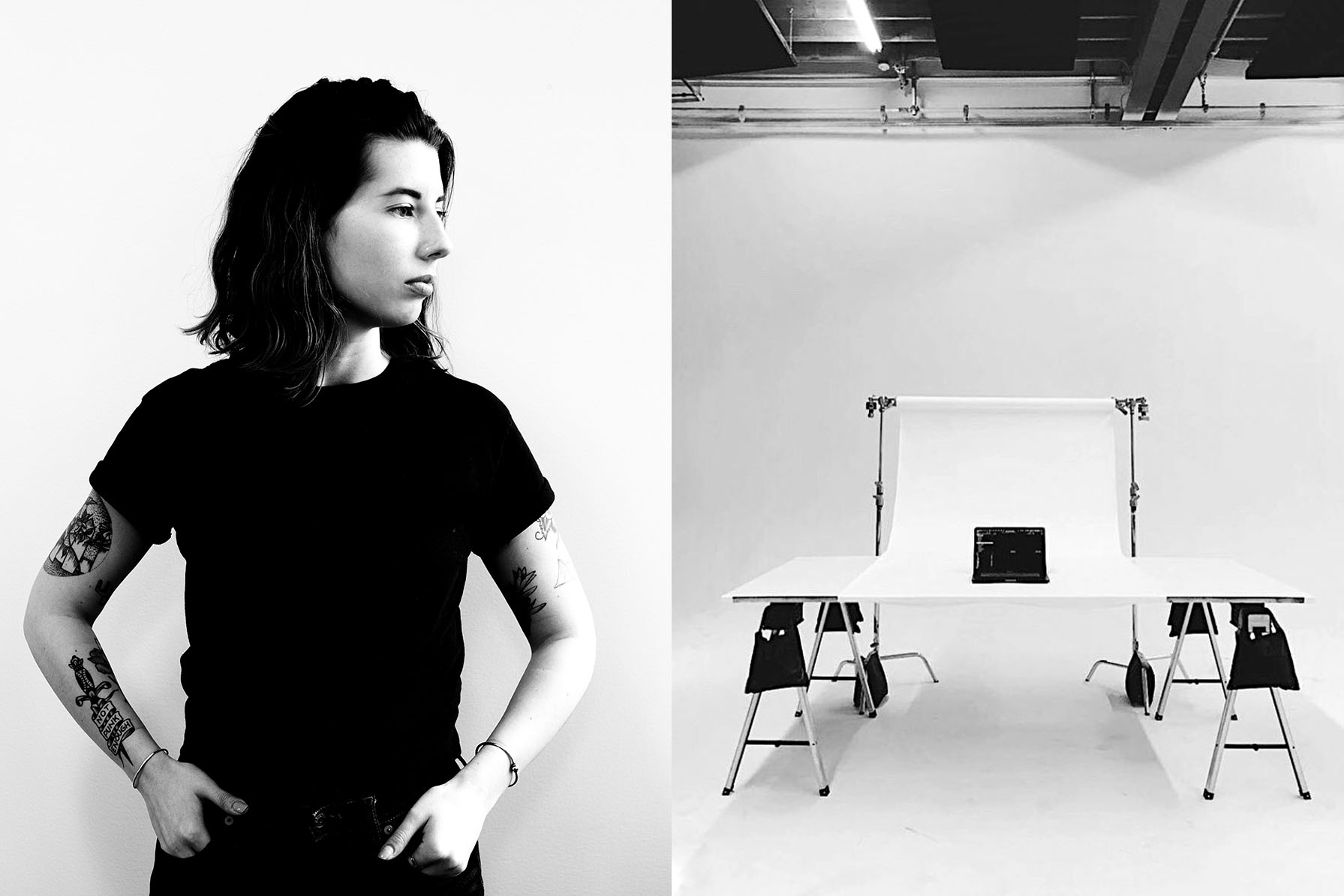 Emma McClurg was one of our very first summer program students back in 2008 and returned to Art on the Farm again in 2010. We have such fond memories of those early years at Cow House and were probably learning as much if not more than our students during those first few summers.

In 2015, Emma graduated with a BFA in Visual Communication Design from the School of the Art Institute of Chicago. She is now a Senior Art Director at Ogilvy in Chicago, a position she earned after a freelancing gig during her senior year of college. She has kindly taken some time out of her busy schedule to answer a few of our questions.

CHS: You went to the Art Institute of Chicago for your undergraduate studies. Was there a particular class or professor that had a profound impact on you as an artist? Do you foresee pursuing any further education?

EMC: Yes! This is one of my favourite stories, actually. I started taking classes in the Visual Communication Design department at the beginning of my sophomore year, and my very first course was Intro to VisCom with Frank Debose. Up until that point, I’d been taking mostly printmaking courses, but had realized that I was never going to be able to satisfactorily achieve the level of detail and precision that I wanted via hand-printing, so I decided to give design a try.

Our first exercise with Frank involved taking a set of 4”x4” grids, a set of black dot stickers, and arranging a particular number of stickers within a grid in a purposeful way (1 dot per grid, 3 dots per grid, etc.).

That was it. Six hours of placing quarter-inch stickers on a piece of paper, with virtually no direction on how to go about doing it. Over the course of the class, Frank came around, took a look at our progress, and asked us to explain the reasoning behind each dot placement. I distinctly remember placing my first dot an inch away from the right-hand border of the grid, just barely hanging off of the x-axis. I voiced that thought process to Frank when he asked. He looked at my grid, looked at me, and said: “That’s good design.”

I think that moment was so impactful because I had always operated under the assumption that in order for something to be good, it also had to be difficult, or time-consuming or a struggle. Learning that there is validity in the simplest possible solution and that I was apparently good at identifying it, was huge for me. I called my dad immediately after that first class and was just like, “This is it, this is what I’m going to do for the rest of my life.”

CHS: You chose to stay in Chicago after graduation. What are some of your favourite things about the city? What do you miss from Boston?

EMC: The food! Not even joking, the restaurant culture in Chicago is a huge part of why I decided to stay. It also helps that the city is so beautiful and culturally diverse, and more affordable than any major city has a right to be. It’s amazing to live in a city that is cosmopolitan in every sense of the word, while also being filled with people who are kind in a totally genuine way.

This is going to sound harsh, but there isn’t a whole lot that I miss about Boston… I’d have to say that I miss New England more than any one city specifically. I miss being close to my parents, I miss being able to be at the ocean in an hour and the mountains in the next, but that’s about it.

CHS: You are currently working as an art director in Chicago. Can you tell us a bit about what your work entails? Who have been some of your most memorable clients?

EMC: I work at a pretty massive advertising agency that manages to feel like a smaller one in terms of the day to day. In simplest terms, I get to work with my writing partner to come up with campaign platforms for our clients. The asks range in scope from a couple of social posts on Facebook to multi-million dollar campaigns that include TV spots, print ads, billboards, radio…the list goes on. Our clients (ex: SC Johnson, Modelo, Corona Light, Morton Salt, Cisco) come to us with a “problem”: usually a product, a message they want to convey, and a rough idea of where they’d like to see the work come to life. As a creative team, we then go off and come up with solutions for the problem, and hopefully, down the line, our clients like one of those ideas enough to buy it. At that point, we get to go collaborate with other cool creative-types, and together we make cool stuff.

I’ve been lucky in that I’ve gotten to work with a huge range of clients and brands over the last few years, but I think the most memorable has got to be Glade Home Fragrance. It’s the brand that I’ve worked on consistently for the longest stretch of time, and it’s the brand that has, hands down, provided me with my lowest career lows and highest careers highs. Case in point: a campaign I was working on for them in fall of 2016 gave me so much extra anxiety that I convinced myself I was having a heart attack on more than one occasion. On the other hand, most of those instances took place in a very fancy hotel, in either Prague or Stockholm, because that’s where we were shooting and editing the footage.

To be honest, I still have to pinch myself sometimes; as stressful as my job can be, that fact that I basically get to sit around coming up with creative ways to relate to people, and then fly off to some exotic location to see that creative vision become a reality is pretty ridiculous.

CHS: Chicago has some fantastic art institutions. Do you spend much time looking at art? Do you continue to make your own work? How have your experiences as an artist informed your professional work?

EMC: I feel like most SAIC alumni would say the same, but I definitely didn’t take enough advantage of my access to the city’s museums when I was a student. Luckily, I work for people who are very vocal about their beliefs that we, as creative professionals, need to surround ourselves with the inspiring work of others in order to produce our own. As a result of that, I’ve been able to patronize a decent amount of the city’s cultural offerings on a pretty frequent basis.

As far as maintaining my own practice, it’s a weird sort of catch 22; I more or less get to do exactly what I love for a living, which is incredible, but it also means that then when I have time for myself, I’m not exactly jumping at the chance to do more design work.

That being said, I am an avid collector of beautifully designed printed materials, which has led me to start organizing and documenting my every day life in a way that reflects those aesthetics; I’m constantly curating the nooks and crannies of my apartment to be places that make me feel both proud and calm when I look at them, and I’ve begun to compile photos from the trips that I take in little soft cover books that I concept and design myself.

CHS: What are your most vivid memories of your time here at Cow House? How did your time here help shape the direction you chose to pursue in college?

EMC: Oh man, there are a lot. There are smells and tastes and sounds that I first experienced at Cow House that I actively seek out now, so in a way, my time there is frequently top of mind. This is a little off-topic, but my first summer at Cow House is when I heard bands like Iron & Wine, Beirut, and the Magnetic Fields for the first time, and I’m not exaggerating when I say that it was life-changing. It was also the first time I ever tried Nutella and strawberries on toast, which was similarly life-changing.

I had quite a few firsts at the farm, but I think the most significant of all was learning that, contrary to what you might experience growing up in a small suburb of Boston, there’s no one way to define what it means to be “creative”. Having an incredible set of technical drawing skills is fantastic, but not having them doesn’t mean that you won’t or can’t be an artist.

It goes so far beyond the mediums, though. I can’t say that Cow House was the place where I was exposed to the format that I would pursue through college, but what I was exposed to is the idea that self-expression through art, in any form, is something that you can choose to successfully build your life around. That realization gave me so much confidence in my own choices and opinions, and when I started my sophomore year of high school after spending the summer at Cow House, I almost immediately pulled myself out of my chosen elective in favor of enrolling in drawing and painting.

At the risk of overstating the impact of my time at Cow House, the work that I completed during my first summer there is what initially convinced my high school art teacher that I was serious about pursuing the subject. That same year, I started talking to him about going to a college that prioritized fine art and design over liberal arts, and the rest, as they say, is history.