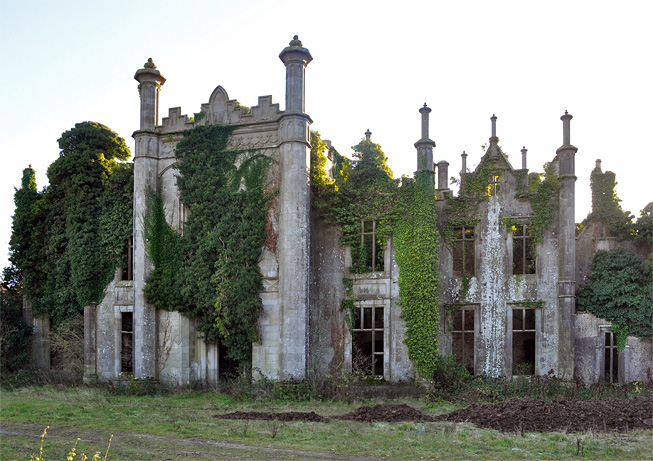 On November 25th we made the short journey with our residency artists to Coolbawn Castle, located two miles from Cow House Studios. Built in the mid-1800s by Francis Bruen for his wife, Lady Catherine Anne Nugent, Coolbawn Castle has a marvellous view of the Blackstairs Mountains. The building is constructed of fine cut white granite stone, sourced from these nearby mountains, and is elaborately ornamented with pinnacles and spires.

Designed by architect Frederick Darley, so much money was spent on the erection of this grand building, that it was locally known as “Bruen’s Folly”. As an absentee landlord who lived in England and rarely visited, Francis Bruen left his agent, Mr Routledge, to run the estate. In the context of the impending Famine, and the tensions of the Catholic tenants and Protestant landlords, the local’s contempt for Bruen was demonstrated when close-by Tomanine bridge was constructed. A discreet stone carving of Bruen’s face was placed in the bridge, and its nose was then knocked off.

Henry Bruen inherited Coolbawn from his Uncle Francis and remained landlord until it was sold on to James Richard Dier JP in 1917 or 1919. He was apparently in negotiations to sell the house or turn it into a sanatorium when it, unfortunately, met its demise in the 1920s. Like many stately homes around Ireland, Coolbawn was, according to the Irish Times newspaper ‘burned to the ground on Wednesday night’, by the IRA in 1923 during the Civil War.

The castle ruin looked magnificent in the crisp winter sunshine, despite its conflicted history and violent end. Coolbawn castle ruins is still an impressive and oddly peaceful place to visit. A favourite feature was a tree growing on the remains of the granite cantilever double-height staircase some fifteen feet from the ground. The building, now green with ivy, is slowly being reclaimed by nature but it is not difficult to imagine its former grandeur and to appreciate its beauty. It would certainly make for an interesting drawing or photography project and in the future, with permission, we hope to visit again with students from our summer art program Art on the Farm and our gap year art program FieldWorks. Please note Coolbawn Castle is located on private property and if you wish to visit, permission must first be sought from the current owners, the Tector family.