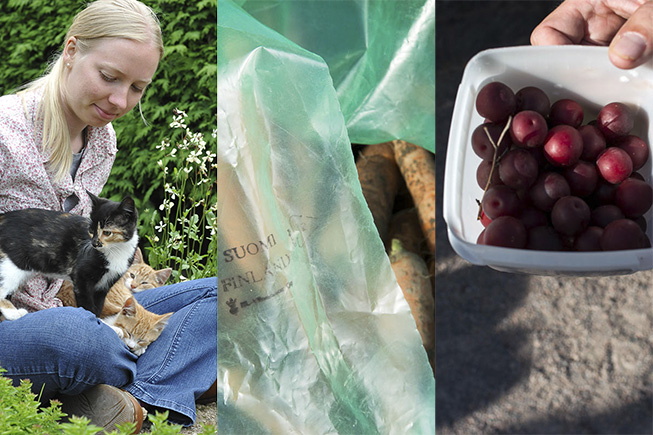 Christin was a visiting artist for our Summer Art Program Art on the Farm during the summer of 2011. She is an artist, photographer, educator, and sustainable food advocate. She holds a MFA in Imaging Arts from Rochester Institute of Technology [2010] and a BFA in Art and Visual Technology from George Mason University [2007]. Her photographs have been displayed in solo and group exhibitions and appeared in both online and print publications. Christin promotes sustainable food practices through photography and community development. She is currently residing in Helsinki, Finland, as a U.S. Fulbright Fellow, documenting Finnish food culture. For project updates, visit her blog.

CB: I have been living in Helsinki for the last eight months through a U.S. Student Fulbright Grant. I came here to explore recently developed urban gardens in the city, as well as the ancestral Finnish tradition of foraging for wild fruit and nuts. The Slow Food Movement is relatively new in Finland. The first Finnish community supported agriculture farm was only started in 2012, while the concept was brought to the United States as early as the 1980s. The first rooftop garden in Helsinki was also initiated in 2012. But since then, the trend has been picking up pace. My goal while in Finland has been to document the projects that have already been initiated and raise awareness both locally for Helsinki residents and internationally, to add to the growing movement away from mass-produced, processed foods to a more self-reliant outlook.

My first few months in Finland were a blur of activity, as I adjusted to a new country while diving right into my work. There was no time to waste, as cold weather would fast approach. I visited and photographed community gardens and farms, as well as attended an urban foraging bike ride through Helsinki. During the dark, cold winter months, I sorted through all the photos I had taken in the autumn and posted highlights to my blog. I recently completed the project and exhibited my work at Aalto University. The show included 48 photographs, which I printed and mounted at the Aalto University PrintLab and arranged on the wall in grids; a video interview with Sini Forssell, one of the board members of a food co-op in Helsinki; and an installation of plants in old boots and cargo shorts, by Helsinki farmer Jan Liesaho of Stadin Puutarhuri.

CHS: What is your most vivid memory from your summer teaching here at Cow House? How did the experience inform you as an artist & teacher?

CB: There were so many incredible and memorable moments during my summer at Cow House that left a strong and lasting impression for me both personally and as an artist and teacher. I remember the day that I arrived to Cow House, after dropping off my bags and settling in, Frank and Rosie suggested that I take a walk and explore the farm and surrounding neighborhood. A wave of excitement swept over me as I took in the views and thought, “This is paradise!” The following weeks were full of adventure on a daily basis, as we instructed the students on the farm, spent time in Dublin and explored other sites throughout the country. Each expedition was incredible in its own way, but the most memorable experience was climbing to the top of the ancient island monastery Skellig Michael, along with the boat ride out to the island and the adorable puffins inhabiting the rocks.

From a teaching standpoint, it was really fun to see all the creative ideas that Frank and Rosie use to inspire and motivate the students. The working environment has helped me to take occasional breaks from the formal, structured style through which I usually worked, to be more playful at times and also to encourage new photographers to take a more light-hearted approach when exploring the world through the camera for the first time.

Frank’s cooking also had a lasting impact, as I think of Cow House every time I cut an onion using the professional technique he demonstrated one afternoon when I was helping make dinner. Additionally I make soup on a weekly basis, and the recipes are often from the Avoca cookbook that was used just as frequently at Cow House. That carrot ginger soup recipe is impeccable and the aroma always takes me back to moments spent sitting around the long table at lunch time, sharing stories and laughter.

CHS: You are currently on a Fulbright Fellowship in Helsinki. What guided you in choosing this location?

CB: After graduating from the MFA program at Rochester Institute of Technology, I knew I wanted to apply for a Fulbright, but I didn’t have a clear idea of where to apply. So I held off for a while and did some research. I read about both the Environmental Arts and the Photography programs at Aalto University. Additionally I learned about some urban garden projects popping up in the city alongside the World Design Capital Helsinki 2012 program. It seemed like a perfect fit for me and Aalto University was incredibly warm and welcoming.

CHS: In addition to your photography you have made a concerted effort to grow your own food working for small farms and yourself. How does this work inform your process?

CB: I began learning a little bit about gardening from a neighbor when I was in college. At the time, I began planting potatoes, lettuce, tomatoes and cucumbers in my parents’ yard. A few years later while I was working on my thesis project in graduate school, I became a work-trade member at a community-supported farm and learned so much more. This job was beneficial in a number of ways – I worked on the farm 4.5 hours per week, which gave me the opportunity to take pictures of the farm on a regular basis. In return for my work, I received a weekly share of vegetables. And to top it off, I had the opportunity to build friendships with the farmers and fellow work-traders. When I had my thesis exhibition, they were all there to support me.

My photographic projects stem from a frustration with the status of mass-produced, processed food, in the United States and beyond. The best solution against GMOs, pesticides and concentrated animal feeding operations is to grow food independently and support nearby farmers using sustainable practices. So gardening informs my work from that angle, as part of my belief system. And on a different level, it connects me to the earth and allows me to pause and take in the beautiful growth process. I haven’t had the opportunity to be involved with the growing process in Finland because I arrived near the end of the harvest season. I have really missed this aspect of my work and look forward to my next opportunity to dig in the dirt again.

CHS: What are your plans after you have completed your Fulbright? Will you be staying in Europe or moving somewhere new?

CB: I have exciting plans ahead! I am joining my fiancé in South Africa in mid-2014. We are getting married and staying near Johannesburg for a while. I am looking into possible opportunities within the photography community there. I will also explore food issues in South Africa and I am excited to settle in long enough to tend my own garden again.