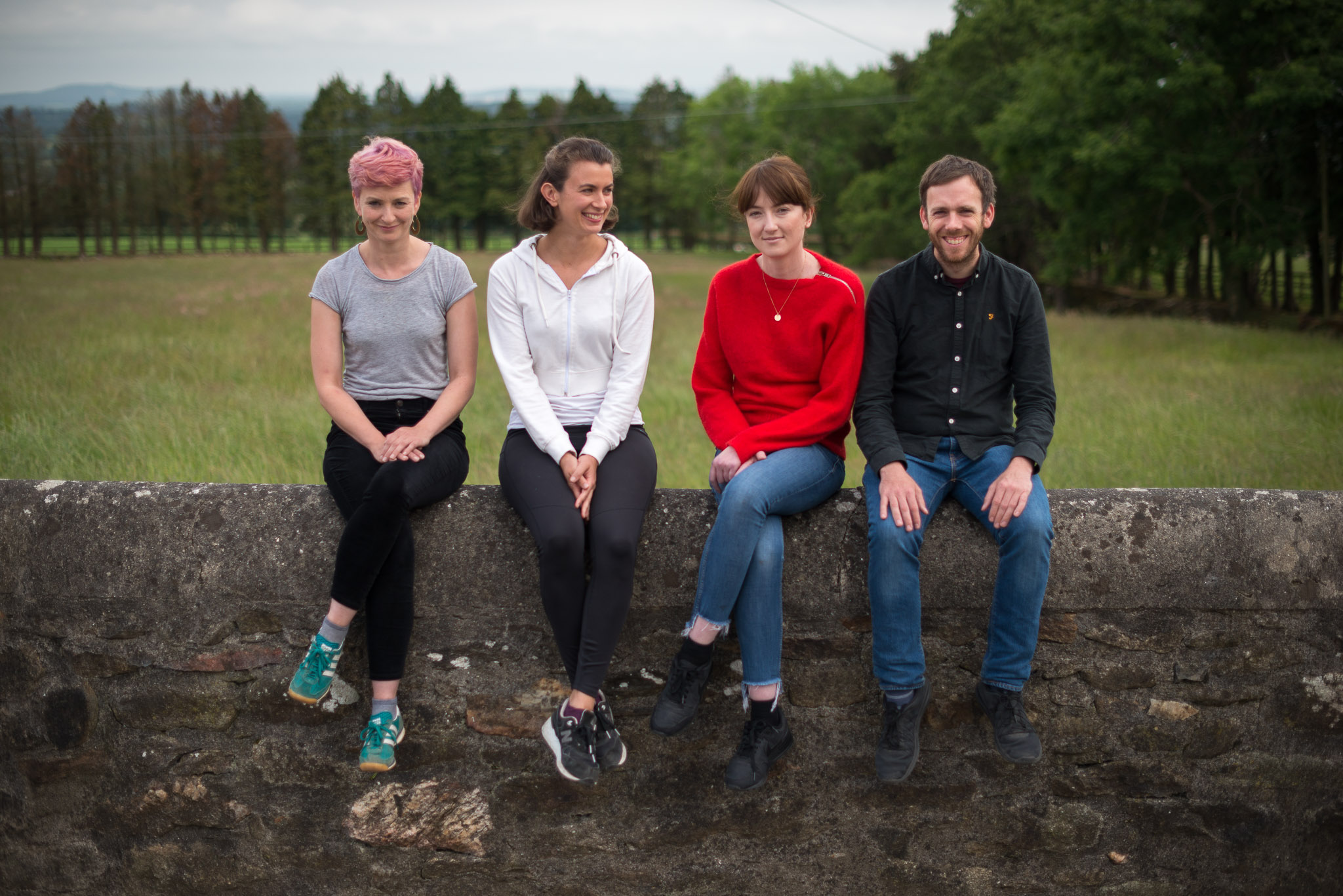 We are delighted to announce our new associate artists (from left to right) Ann Maria Healy, Mathilde Ganancia, Sarah Tynan and Paul Gaffney who in their new roles will be teaching this summer during Art on the Farm. These four artists represent a diverse set of artistic practices ranging from painting to sculpture, installation, performance, video and photography. In their young careers, all have exhibited widely whilst receiving recognition for their exceptional work as recipients of numerous grants and awards. We look forward to working with them over the next few years and are certain they will have much to add to our educational and residency programming.

Ann Maria Healy is a visual artist based in Dublin. Her practice is concerned with reoccurrence, mimesis, the power of history and narratives deeply embedded within the human psyche. Taking established tropes, she reworks them into alternative narratives, seeking potential methods of togetherness outside of the contemporary hegemonic modes of social being. Issues of gender and representation within popular culture are important reference points within her practice.

Selected exhibitions include Futures, Series 3, Episode 1, The Royal Hibernian Academy Dublin (2017); I like to eat with my hands, Wexford Arts Centre 2016; Your ass protrudes toward the malaise, Eight Gallery, Dublin (2015); Kairos Time, Tent Gallery, Rotterdam (2014). Previous residencies include The Cow House Studios, Wexford (2015); The Banff Centre, Canada (2014); The Guesthouse, Cork (2011) and The Live Art Development Agency, London (2010). Healy is an MFA graduate of The Piet Zwart Institute, Rotterdam (2014) and a recipient of the Irish Arts Council, Visual Artist Bursary Award (2016).

With installations, texts, paintings and videos, Mathilde Ganancia has developed an eclectic body of work where certain paradoxes of our time are performed and critiqued.

Hunting for new discoveries she has lived in Taipei, Chicago, London, Paris, Marseille and Lijiang. Now back to Paris she developing with other artists an artist-run space in Montreuil.

After graduating from l’École Nationale Supérieure des Beaux-arts de Paris, she took part of several art residencies in Rhyme Art Centre (China), Cow House Studios (Ireland) and Skowhegan School of Painting and Sculpture in 2015 (US). Her work has been shown and screened in several art galleries in Paris, Arles, Brussels, London, Ireland and California.

Sarah is an Irish artist currently based in London and Dublin.  Sarah obtained a first class honours degree in Painting from the National College of Art and Design in Dublin and an MA in painting from the Royal College of Art in London. Sarah has exhibited widely both nationally and internationally with notable exhibitions including the Dazed and Confused Emerging Artist Award at the Royal Academy, London and Bloomberg New Contemporaries at the ICA, London.  More recently, Sarah was selected by the British Council to participate in the prestigious residency SWAP UK/UKRAINE in Kiev, Ukraine. Sarah’s varied artistic practice encompasses painting, sculpture and installation.

Paul holds an MFA in Photography from the University of Ulster in Belfast and was recently selected for the Arts Council’s ‘Next Generation Bursary Award’ 2016-17.

His practice explores different ways of experiencing and representing landscape and immersion in nature, and his first book, We Make the Path by Walking, focused on the idea of long-distance walking as a form of meditation.

Paul’s second publication Stray was photographed by night in the forest next to Cow House Studios during an artist residency in 2014, and his latest project Perigee was made in the Ardennes forest in Luxembourg under the light of the full moon.

His books have been nominated for the Photobook Award at the International Photobook Festival Kassel (2013 & 2016), shortlisted for the European Publishers Award for Photography, and selected for several ‘Best Photobooks of The Year’ lists.