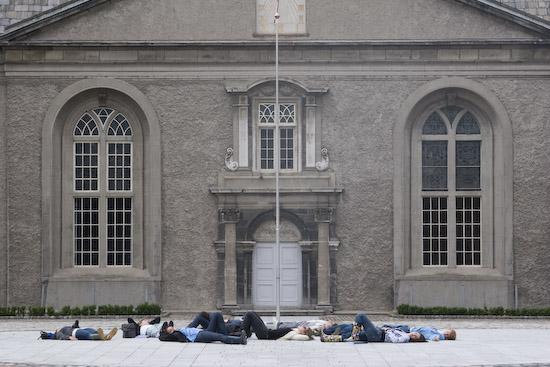 Thursday morning, we got up early and headed up to Dublin. The trip took about two hours, with a rainy stop at the Glendalough Monastic settlement. The ruins were beautiful, even in the rain. Our first stop in the city was at the Douglas Hyde Gallery on O’Connell Street, where among many other great works we saw the displaced studio of Francis Bacon. After that, we made a stop at our hostel, Avalon House on George’s Street. That afternoon/evening we had some time to explore the city, take photographs, sketch and shop. The next morning, we ate breakfast at the hostel and headed for Newgrange, a 5000 year-old enclosed tomb. Later in the afternoon, we went to the Irish Museum of Modern Art, where we had a guided tour of Janaina Tschape’s latest works, and hung out in the Formal Garden nearby.
Exhausted from the trip, we slept until noon on Sunday, and woke up to a delicious pancake breakfast! The next few days were spent learning to process our own photographs in the darkroom, and receiving an introduction to oil paints. Our nights have been spent watching classics such as “The Breakfast Club” (twice!), and runner ups…”Fight Club”, and “Lost Boys”, and presentations of both Rosie and Frank’s artwork. Tomorrow its off to the west where we will spend a night in Galway and another on the Aran Islands. Please have a look at our updated photos page, and check back soon for more updates.