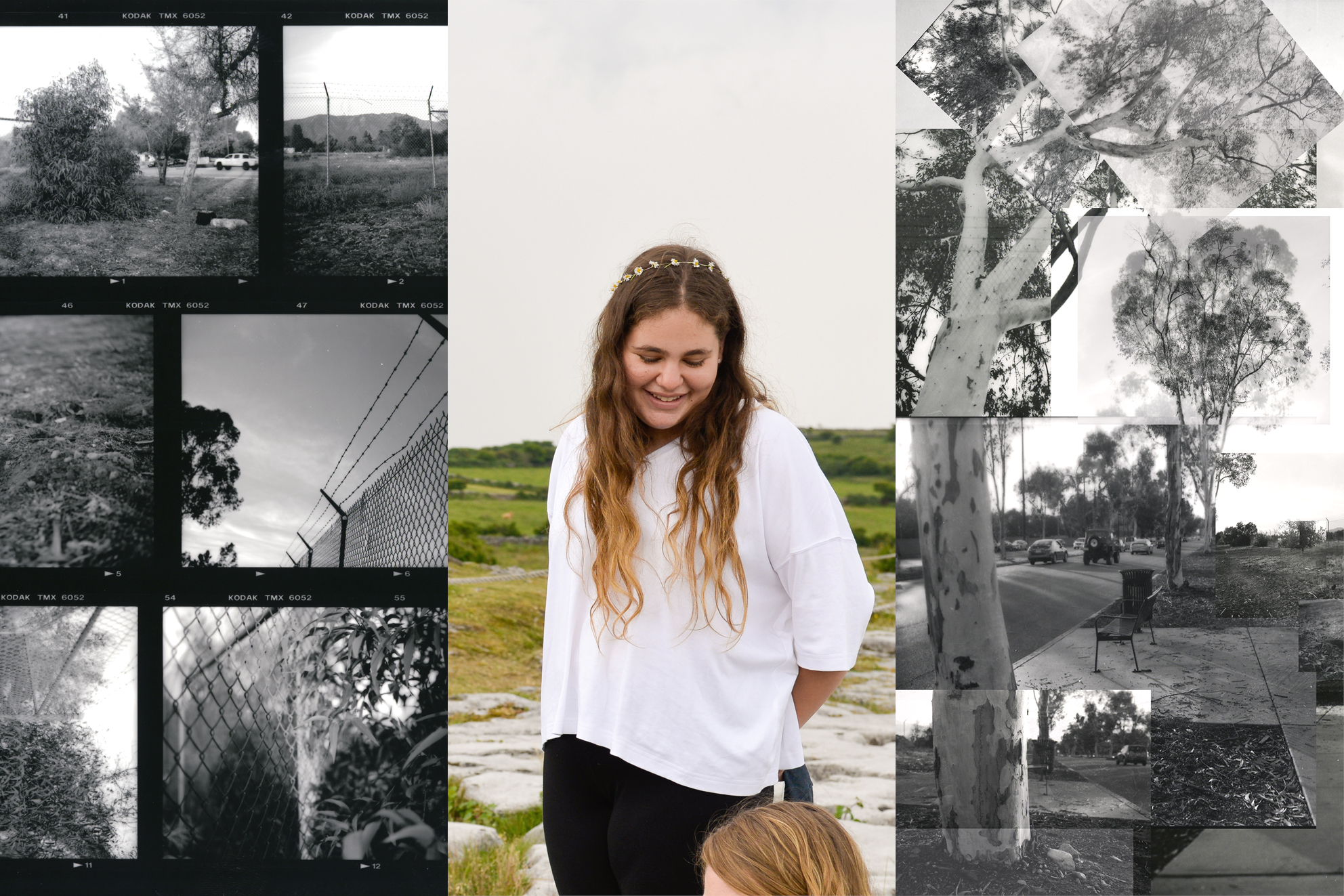 Abigail first attended Summer Arts Program; Art on the Farm in 2010 and returned for two more summers before graduating from high school and heading off to Pitzer College in Claremont, California. She returned as an intern for the summer of 2014 and again last year for How to Flatten a Mountain, our new residency in collaboration with PhotoIreland. We have had the privilege of watching Abigail grow as an artist and a person over the past seven years. Her return visits and our continuing friendship epitomise what we have tried to build here at Cow House Studios, a community of individuals who share our passion for the arts, our beautiful Irish countryside and the close relationships that emerge from time shared on the farm.

CHS: You’re currently in your last year at Pitzer College. Can you tell us a bit about your thesis, where you are currently with the project and what do you hope to achieve by the end of the semester?

AT: My thesis is still up in the air… Conceptually, I am interested in systems of classification and categorization, and how different systems compare to each other. My project is specifically investigating how the gridding and categorization of land relate to the systems that classify the Archive. I hope my work questions how categorization and classification directly affect not only different histories but our access to them. Last semester I photographed the college library’s special collections backrooms, which house everything from Herbert Hoover’s personal collection of alchemical and mining books to rare maps of Sweden. The photos focused more on physical classifications within the rooms rather than on individual documents. Next semester I will continue this project by photographing relevant documents and landscapes. I am unsure the best way to present this work, but it might involve a book.

CHS: Your first summer with us was in 2010 and you returned for a few more sessions of Art on the Farm, again as an intern in 2014 and last year for our residency How to Flatten a Mountain. What keeps bringing you back? From your perspective, how has Cow House changed? How has it remained the same?

AT: Though I often joke with you that Cow House will soon be its own corporation ready for world domination, I know most of the changes you have made are really great. Beyond the few physical alternations in the studio and barn, the program’s structure largely remains the same. I know this year you are more significantly changing the summer’s layout by cutting a session and lengthening the remaining two, but even then I doubt much will change. As we have discussed endlessly, I believe Cow House is special because of things like its small size and altering that significantly might ruin it. But, you know that.

As a teen, I kept returning because Cow House made me happy and I was trying to finish a portfolio for college. There is something inexplicably special about Cow House; its size, connection to family and the land, the fact that it’s a working farm, all of the time and care everyone puts into running it are really important and palpable. Most art programs are not like yours, and its obvious how hard you’ve all worked to cultivate such a special environment. Last summer I attended How to Flatten a Mountain and then went on to a much longer residency in Berlin. Though HTFAM was only ten days, the work I made, the impression I was left with, and the people I met were better than at the two-month-long residency that followed. This not only reaffirmed Cow House’s commendable character but cemented its important imagination. Also, I just love you guys 🙂

CHS: You’ve spent the last four years living in California. As a New Yorker, have you enjoyed your time there? Do you think you’ll stay after college or move elsewhere?

AT: I really like Southern California now, but it was a hard coming from New York. I went to the same school for thirteen years (K-12) before college, and adjusting to a new set of people was difficult. After a year, once I finally had great friends and was doing interesting things in school, I really began to love California. I took many field-trip based classes that showed me the state like I couldn’t see it on my own. I learned California is incredible because it’s landscape is so diverse. My college sits about thirty miles east of Los Angeles in the semi-arid foothills of the San Bernardino Mountains, an area that once produced most of the world’s citrus. It couldn’t look farther from the typical image of LA, yet it’s still in Los Angeles county and not far from the city itself. Exploring this environment defiantly shaped the research that is becoming my thesis; I am fascinated by Southern California’s history, particularly that which shaped its land and landscape. Though I am unsure where I’ll be next year, I am sad to leave the college and my communities there. I will be back one day…

CHS: What are a few of your most vivid memories from your first summer at Cow House? How do you think your experiences contributed to your development as a photographer?

AT: My first year at Cow House taught me more about myself, and less about being a photographer. You, Rosie and Julie, put me through ‘positivity boot camp’ in order to change my often negative attitude. Though I made some nice photographs of Michael around the farm, I came away from that summer happier and more cognizant of how my actions affected others. I learned how to use a medium format camera that year, and gave up really easily. I tried using it for a final project but quickly realized the photographer needs to direct their subjects or it just won’t work. I realized that a little too late, but it was still a good learning experience.

I will also never forget all the candy bars and chips we snuck from the pantry that first year. Though you quickly understood that keeping the pantry in the studio was not wise, it made for fun late night work sessions 😉

CHS: If you could be magically transported to Mary and Michael’s kitchen describe for us the scene. Where do you sit? What’s Mary up to? Michael? What’s on the telly?

AT: Ok, this one is easy… It is Sunday evening, and Michael is sitting at the kitchen table in the left chair facing the TV. He gets up from reading the newspaper to offer me a Twix when I enter the house. The dogs are all sleeping in the entry area, but start barking at the open door. Michael yell’s at the dogs to stop barking as he goes to the green cabinets next to the back door to get the Twix basket. Though I will politely refuse, he will ask me until I take at least two. Later, he will probably offer me more Twix. Mary comes down from upstairs or the back and offers to make tea. After making tea she will sit down at the kitchen table in the end chair to Michael’s right, and likely start reading a magazine. I will sit down next to Michael. Antiques Roadshow will begin soon. Michael will only watch until he finishes reading, but Mary and I will stay the whole time. Several other family members are likely to come in during this hour of bliss and sit down and watch too.